The CaveUT package was first developed in 2005 and has since been used in many academic and commercial projects all over the world. In 2009 PublicVR asked us to fix a issues present in their latest implementation, which has resulted in a complete redesign and rewrite of CaveUT. The project also included a rewrite of VrpnUT and a feasibility study of CaveUT for Unreal Engine 3.

CaveUT utilizes multiple networked instances of a game in order to create a multi-viewport environment. Each viewport’s angular and translational camera offsets, as well as field of view angles are configurable through a graphical user interface. A game independent proxy class handles the lag-free synchronization of all viewports through standard function replication in both dedicated and listen server configurations.

Each viewport can be configured to be a master or a slave, so that any number of proxies and standard viewports can be combined to create a virtual environment consisting of several caves in combination with single-viewport desktop or laptop user stations.

CaveUT has been written entirely in UnrealScript and with reuse in mind and, with very minor modifications, should work in every Unreal Engine 2.5 based video game or simulation. The core functionality is demonstrated in two example applications, one of which implements a 3D cursor interface that seamlessly spans multiple screens in CAVE setups.

VrpnUT, a package I developed in conjunction with CaveUT, allows for the integration of VR input devices, such as treadmills through the standardized VRPN network protocol. 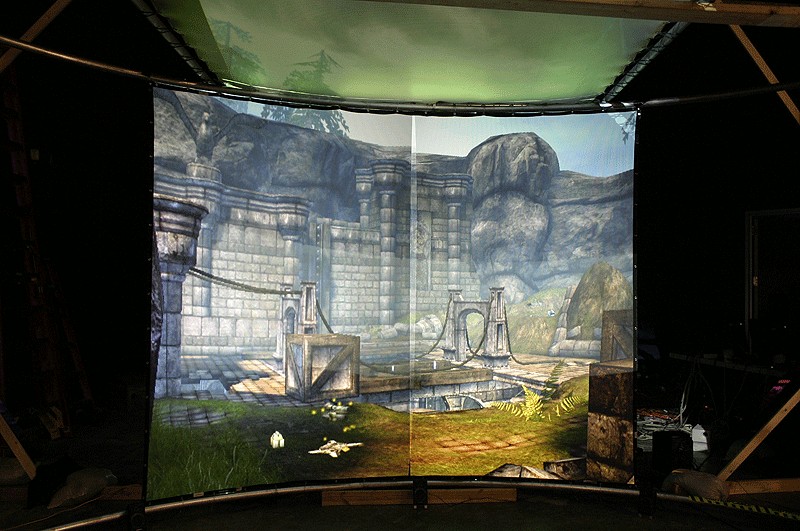